On July 14, 1912, on the occasion of Aurel Vlaicu’s return from a memorable contest in Aspen, Austria, a major air show was held on the current field of Gai suburb where the aviation pioneer was cheered by his fellow countrymen as the hero of all Romanians. In this area there was an airport-like infrastructure, with a runway, hangar and airport station. In the year of 1920 the Franco-Romanian Aviation company was founded, the first airline in the aviation history which operated trans-continental flights. On the 17th of September 1922, the French pilot Maurice Nogues made his first trans-continental flight with an aircraft, the SPAD-46 model offering passenger transportation services on the Paris – Strasbourg – Prague – Vienna – Budapest – Arad – Bucharest – Constantinople route.

To achieve flight between Bucharest and Paris within a period not exceeding 24 hours, it was decided that the last part of the route would run at night, so that on the 10th of September, 1923, night flights were introduced with a Caudron C 61 aircraft. On 10 December 1931, the military land of Gai suburb was taken over and after overhaul and specific equipping, Arad Airport was established. Based on the minutes of proceedings of 18 February 1933, the airport becomes operational. 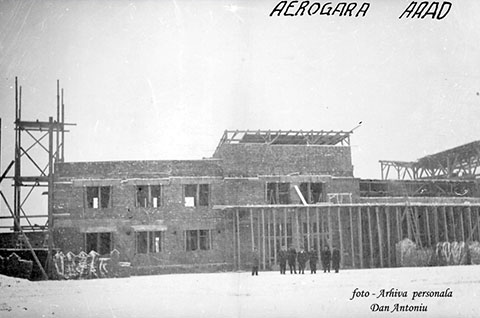 As a result of negotiations that took place to establish a new airport, on May 30, 1935, the land in the Ceala suburb was ceded by the municipality to The Civil Aviation, where they began the construction of infrastructure. The construction of the current airport terminal was finished in 1936 and the official opening of the new airport took place on November 14, 1937. Since that time all air traffic activity was conducted from this location and landings and take-offs were made on a grass runway.

Even if external circumstances of the Second World War affected our country, Arad Airport activities ran in normal conditions, with LARES company operating at Arad until the 14th of November, 1940. From November 15, the Bucharest – Vienna – Berlin line was operated only by Lufthansa and MALÉRT. Since that date, there would be a German military aviation activity securing their own services. An important event in the history of the airport took place on November 6, 1940 when a parade of German business organization was held and minister plenipotentiary Dr. Carl Clodius attended.

During the Second World War, the airport was used for military purposes by the German Army, with the Romanian authorities struggling for its release. Later, the Soviet and the Anglo-American armies used the airport to support the offensive to the heart of Germany.

Traffic requirements made the necessity to build a 2000 meter-long concrete runway in 1953. Taxiway routes A and D were completed at the same time with the construction of the runway and the beaconing was reconstructed in 1954 and equipped with Elba light fixtures, making Arad Airport the second with beacons of this type after Băneasa Airport.
• 1958 – installation of the first radar surveillance and precision system in Romania
• May 31, 1968 – Vasile Munteanu is appointed commander of the airport. He will remain in the same position at the airport until 1991
• 1969 – the first AN-24 aircrafts land, the view room with the electrical power station and fire station is built
• 1970 – the year of glory of Arad football team UTA makes the landing of three aircrafts of KLM airline carrying the team of FC Feyenoord Rotterdam
• 1974 – the instrument landing system (ILS) is installed on the direction of landing 09
• 1975 – the extension of the airport building begin

Between 1960 and 1990 domestic flights between Bucharest, Cluj and Constanța were operated, international flights to Stuttgart, Frankfurt, Dusseldorf, Belgard and Helsinki, charter freight flights, aviation school flights, utility aviation and helicopters. On July 20, 2004, a zeppelin belonging to Friedrichshafen Airport in Germany flew over Arad, finally landing at the airport. Such an event has happened 75 years ago when at the helm of the zeppelin was none other than Graf Zeppelin.

This website uses cookies to improve your experience while you navigate through the website. Out of these cookies, the cookies that are categorized as necessary are stored on your browser as they are essential for the working of basic functionalities of the website. We also use third-party cookies that help us analyze and understand how you use this website. These cookies will be stored in your browser only with your consent. You also have the option to opt-out of these cookies. But opting out of some of these cookies may have an effect on your browsing experience.
Necessary Always Enabled
Necessary cookies are absolutely essential for the website to function properly. This category only includes cookies that ensures basic functionalities and security features of the website. These cookies do not store any personal information.
Non-necessary
Any cookies that may not be particularly necessary for the website to function and is used specifically to collect user personal data via analytics, ads, other embedded contents are termed as non-necessary cookies. It is mandatory to procure user consent prior to running these cookies on your website.
SAVE & ACCEPT